Houston is a sprawling city covering hundreds of square miles. With freeways, highways, railways and roads aplenty, the opportunities to get around are as confusing as they are numerous. Once you’re in the city, things get a little better. If you’re planning on coming to Housing any time soon, here is the lowdown on what to expect. 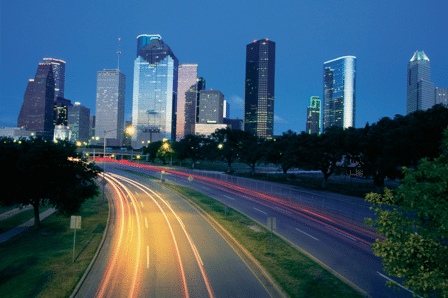 The local public transport system is run by the Metropolitan Transit Authority of Harris County, Texas, METRO for short. They run light rail, METRORail through the city as well as buses, trolleys and lift vans.

METRO runs the buses too and runs a fleet of over 1,200 buses that cover 1,285 square miles of city. There is the standard buses that run distinct routes throughout the metro area as well as Park n Ride systems at specific places. These are a great way to travel if you don’t know your way round the city.

There are also non-government initiatives to help people get around, such as Green Link, a joint venture providing free buses in the downtown areas of the city, or Megabus.

There are over 575 miles of freeway and expressway in Houston, with more on the way. That said, the roads get extremely busy and it’s hard to get around quickly by car. That’s despite the car being the primary transport for those who live here and the primary focus for those who manage the city.

Car is the definite king in Houston, so it’s a good job the city is well laid out and logically ordered to help people get around. There are two beltways, both of which are busy but usable and several major routes in and out.

Houston does run a B-cycle scheme that is gradually gaining ground. The distinct lack of cycle lanes makes cycling in Houston challenging but exciting.

With the emphasis very much on the car, unless you’re Downtown or in some of the retail districts, you’re on your own. Sidewalks aren’t exactly great here and we have the pedestrian accident statistics to prove it. That said, it’s still relatively safe to walk around most of the city, just watch yourself when you step off the pavement.

Houston is fairly easy to navigate once you get used to it. While provisions for cycling and walking need definite improvement, it’s still easy to get around if you plan in advance. There are plans afoot to improve the transport infrastructure and the Texas Department of Transportation are always working to improve the road network around here.