The city of Anchorage is one of the most beautiful and challenging cities in which to live anywhere in the world. It’s the main city in Alaska, with slightly over 380,000 residents. Summers are lovely and moderate, but our winters are long and cold. Only the most hardy make it here but it’s well worth the effort! 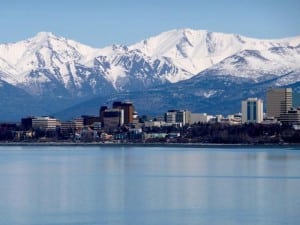 Alaska was bought from the Russians in 1912 and brought into the United States. There was a native settlement in the area at the time, but no town to speak of. It was the needs of the Alaska Railroad that formed the basis for what is now Anchorage as they used Cook Inlet as a port for shipping while they built the tracks. It was from there that the city grew.

It was the railroad that provided most of the early income and immigration to the town. Air transport arrived in 1929 with the building of Merrill Field which was replaced by Anchorage International in 1951. The arrival of the military brought further wealth to the town as Elmendorf Air Force Base and Fort Richardson were built in the 1940s.

The discovery of oil in Prudhoe Bay changed things here as our economy shifted from transport and the military to oil. That oil still provides much of the income for the city as well as revenue for many supporting industries and immigrants.

It isn’t just oil up here, there are minerals too and the extraction of which provides for many jobs. As does the military, tourism and the government. The Port of Anchorage is busy and Ted Stevens Anchorage International Airport is the third busiest cargo airport in the world. 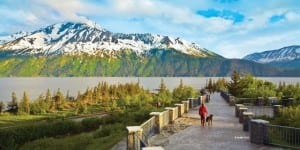 Anchorage has a subarctic climate, meaning we have mild summers and harsh winters. There is no spring and fall to speak of, just medians between the two other seasons. Winter temperatures can fall to 10 degrees F. The lowest ever temperature here has been -38 degrees!

Anchorage is a small city and most people arrive by air at the Ted Stevens Anchorage International Airport. The airport sees a few national and international carriers. The Alaska Railroad is another popular route into the city but that’s mainly for tourists. Cruise lines also stop at The Port of Anchorage and offer some unmissable views of the area as you come into and leave port.

The main mode of transport here is the car. The city sprawls and it isn’t really walkable. The Alaska Highway takes us to the Lower 48 and other highways take us to other parts of the state. Getting around the city itself is easy as there aren’t that many of us here. Rush hour can see a traffic jam or two, but nothing like it is down south.