San Diego is a lively city on the West Coast of the United States, in the state of California. It sits on the edge of the Pacific and has miles of golden beach and an almost limitless ocean to play in, as well 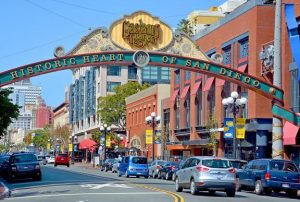 as more activities than you could do in a lifetime.

Located close to the Mexican border and around 120 miles south of Los Angeles, the city has a population of around 1.5 million. Known as much for its navy base as its lovely climate and laid back character, this city has a lot to offer anyone who wants to make a new life here or just live and work.

Furnished housing in San Diego is a real mix of converted historic buildings and purpose built apartment blocks and condos with some single family homes and townhomes thrown in.

The military has a huge presence in San Diego, as does tourism, trade and research and manufacturing. It’s a modern economy that is diverse and forward looking. With low unemployment and an educated population, the city is regularly regarded as one of the best places for small businesses or startups.

San Diego is home to the largest navy fleet in the world with 53 ships and over 35,000 employees. This has a huge influence over the city character but doesn’t dominate. Major employers in San Diego include the United States Navy, University of California, Sharp HealthCare, Qualcomm, San Diego Unified School District, Dexcom, Kaiser Permanente, Scripps Health, General Atomics, Cubic, and NASSCO.

Getting around San Diego 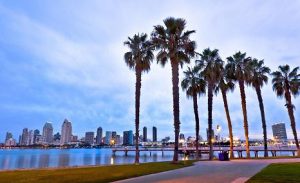 San Diego International Airport (SAN) is the main airport serving the city while other flights land north at LAX or SFO.

Amtrak runs rail services into Santa Fe Depot while local commuter trains use Old Town and Sorrento Valley. The Coaster commuter train also serves as a very popular way to get to work.

San Diego is a mix of beach life and a strong work ethic. It’s the best of the Californian lifestyle with hard work thrown in. It’s a great place to live and well worth checking out.

Here is a list of the top things to do in and around San Diego.

Go to the beach. No visit would be complete without spending time on one of the many free beaches up and down the coast around the city. Visit La Jolla Cove too, for an amazing sunset, one you will never forget. 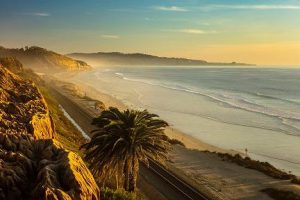 San Diego Zoo. Our zoo is part of the city identity and no visit should miss a trip to the zoo. As one of the largest, most complete collections of species in the country, it really does make for a fascinating and educational day out.

SeaWorld San Diego. SeaWorld is another must-see if you’re interested in the ocean and the animals which call it home. Much like its Floridian cousin, the center is a mix of education, fascination and entertainment. A great family day out.

Legoland California. Legoland is a theme park made from the little and not-so-little bricks. It has over 60 rides and attractions and plenty of seasonal entertainment to keep you and the little ones entertained. Another great family day out.

USS Midway Museum. The USS Midway museum is a retired aircraft carrier that has been turned into a living museum, offering guided tours, audio tours, flight simulators and the ability to listen in to pilot radio chatter recorded during Operation Desert Storm.

Seaport Village. Another great trip is a visit to Seaport Village. This venue doesn’t cost anything to visit and offers a range of free entertainment, shopping, eating and leisure time by the ocean. It’s a great place to people or boat watch and an easy way to spend a day without spending too much money!

Old Town. San Diego’s Old Town is our historic district, full of museums, exhibitions and other venues that celebrate our rich history. There is a range of historic buildings, including the 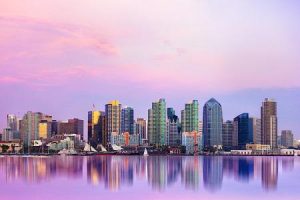 Mission Bay Park. For a lazy afternoon wandering scenic paths, or for running or jogging along the 20 miles of pathway through the area. There is grass, trees, ocean views and regular workout areas for those who feel energetic.

As you can see, there is plenty to see and do in the city. Not all of it costs money, in fact, much of what the city has to offer doesn’t cost anything at all. That’s one of the reasons San Diego is such a great place to live!