Baltimore is a major city in the state of Maryland and is the 20th largest metropolitan area in the country. It has around 2.7 million inhabitants and the largest seaport on the Atlantic coast.

Baltimore is one of our oldest and most distinguished cities. Officially founded in 1729, it was a village, then town from the turn of the 18th century. It began life as a port for the tobacco industry as it was the closest point to the UK. 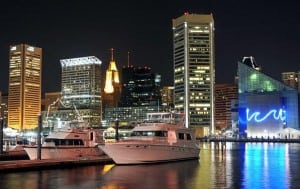 As the port grew, so did Baltimore’s importance. Gradually more and more product was shipped from the port to Britain. Baltimore was also used as a way station for sugar shipments from the Caribbean to Britain.

Baltimore itself was named after Lord Baltimore, a member of the Irish House of Lords. The Lord got his name from the area of Baltimore in County Cork and was a founding member of the state of Maryland, the city was named in his honor.

Our city played a pivotal role in the Civil War, being the first and leading city to begin protests at the British taxes. Eventually the port stopped trading with the British and eventually fended off repeated attacks from redcoat forces. It was in Baltimore, while observing defenders at Fort McHenry fight off the British that Francis Scott Key wrote the “Star Spangled Banner.”

Once things settled down, Baltimore began growing once more. The arrival of the National Road and the Baltimore and Ohio Railroad brought trade and people with them, allowing the city to grow even faster. These transport links also allowed the city to begin manufacturing, which brought work and wealth to the area.

Baltimore is a modern city that is rapidly being regenerated and brought back to its former glory. As you would expect with any modern metro area, there is a huge variety of things to do.

Arts and culture are both well served in our city. Our diverse cultural mix and long history ensures there is plenty to do whatever your taste. Baltimore plays host to Lexington Market, Maryland Zoo, Great Blacks in Wax, Harbor Place and the National Aquarium, among many others.

No city would be complete without its entertainment districts and Baltimore has plenty of them. There are clubs, live music venues, bars, restaurants and shopping malls galore. Particular highlights are the Pier Six Concert Pavilion and the Baltimore Arena.