Omaha is a lovely city that extolls the finer virtues of the Mid-west. It’s friendly, well-informed, lively and offers a lot to residents and visitors alike. As we live here, we may be biased, but we think it’s one of the best cities in the country.

The land that is now Omaha was once Native American country peopled by the various tribes who wandered through here. The first written record we have is from Lewis and Clark who came through in 1804 and stopped some 20 miles up the river. 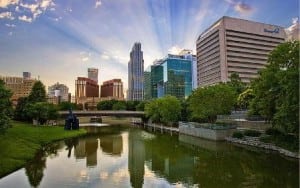 The first person to be credited with Omaha is ferryman William D. Brown who ran the Lone Tree Ferry bringing settlers over from Iowa. In 1854, the city was officially named and growth began. Initially, growth was modest as Omaha factored mainly as a trading post than a city with its own resources. That soon changed when the railroad arrived in 1863 as the First Transcontinental Railroad broke ground near the city.

The building of the Union Stockyards in 1883 was the first step in true commercial independence as many major meatpacking companies moved into the area. This kept money coming in right through to the 20th century. Meat and warehousing provided much of the employment and money throughout the early life of Omaha and elements of that still exists.

The modern city economy has diversified hugely since then with some Fortune 500 companies calling it home. It is a very successful city, with business and tourism being major income generators.

The climate here in Omaha is called humid continental, which means long humid summers and cold, dry winters. Humidity is high here and we get around 30 inches of rain per year. Winters are dry but we do get snow, summer months can be steamy and storms are regular features during hot weather.

Eppley Airfield Airport is our main air hub and is only a few miles from the city. It’s easy to get to and is served by most national airlines. Amtrak runs the California Zephyr through here which runs between Chicago and San Francisco and links us to the rest of the country by rail. We also have the Eppley Express, which is a local train linking Omaha with several cities in the area.

Greyhound and Megabus are the main buses that link us nationally as well as Metro Area Transit which runs commuter services in and around the city. Being a modest-sized city, getting around by car isn’t a problem. We do have the usual frenzy at rush hour, but the rest of the time it’s relatively calm.