Seattle is a city in the far northwest corner of the continent, on the Pacific coast, 100 miles south of the Canadian border. It is a port city, the 8th largest in the country and is currently home to almost 4 million people.

The area that is now Seattle has been home to various peoples for over 4000 years. Once home to the Duwamish tribe, the area was populated sparsely but continuously for thousands of years.

George Vancouver was the first recorded European to venture into the area in 1792 during his quest to chart the Pacific Northwest. Settlers first arrived in 1851 and made claims to areas at the mouth of the river. The Collins and the Dennys established competing settlements, Alki and Duwamps, which sparred for a while before Alki was abandoned.

The name Seattle came in 1853 and was named in honor of Chief Sealth of the Duwamish tribe, who was one of the founders of the city. The town itself was incorporated officially in 1865. 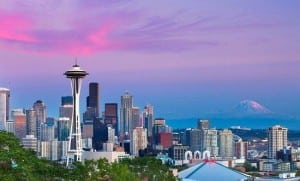 The city’s early success was mainly thanks to plentiful supplies of lumber and minerals and the hard work of residents. The town suffered boom and bust, much like many others. However, unlike many other towns, Seattle used the bust times to build a wider and stronger economy, ensuring its long term success.

The Gold Rush brought people, ships and prosperity to the area as Seattle established itself as a port for transporting north to south. That remained throughout the city’s history as other industries joined in. The modern Seattle is now known for manufacturing and technology, both of which provide plentiful employment to residents.

What to do in Seattle

Seattle is a large metro area that offers a good quality of life to everyone who calls it home. The outdoors plays a big part in our lives, but so does city life. There is coffee, entertainment, music and food for every day of the week here. It’s a great place to live and work.

The arts and culture scene is strong in Seattle as we are the center for performing arts in the region. Highlights include; the Seattle Opera and Pacific Northwest Ballet, Frye Art Museum,Seattle Art Museum, Seattle Metaphysical Library and many more.

Music is part of our soul and we have a range of venues and festivals to keep us happy throughout the year. Entertainment options are plentiful too, with bars, restaurants, comedy clubs and yearly events that fill the calendar. Highlights include; the Seattle Symphony Orchestra,Seattle Youth Symphony Orchestras,Seattle International Film Festival, Seafair and the Penny Arcade Expo.

Seattle has a selection of high quality museums and historical monuments that offer a glimpse into the near and distant past. Highlights include; The Wing Luke Museum of the Asian Pacific American Experience, Science Fiction Museum, Museum of Flight and the Burke Museum.