Despite its size, San Francisco is actually fairly easy to get around. We not only have a huge road network, we’re also pretty well served with public transport too. With the Californian weather also supporting us, walking and cycling also play a big part in how we traverse our home city.

If you’re visiting San Francisco, you’re spoiled for choice if you need to get places. In fact, over 32 percent of residents here use public transport to get around. That’s one of the highest utilization rates of anywhere in the country! 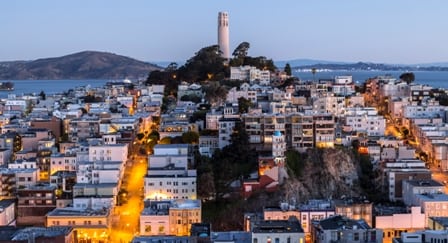 We have a huge subway system here, as well as street trolleys and the Muni. The Muni is the Municipal Railway. It’s one of the largest in the country and combines light overland rail and the subway. Bay Area Rapid Transit, or BART runs most of it, including the Transbay Tube, which is an underwater subway that runs across the city.

BART also runs the buses here in San Francisco and there are thousands of them, with hundreds of stops on most streets in the city. Buses are pretty good here, with a reliable service and reasonable fares. Getting around by bus is a very viable and popular method of transport.

Driving around San Francisco in a car isn’t difficult if you know the grid system. What is difficult is finding somewhere to park. There are literally hundreds of car parks around, but they all get very full, very quickly. Parking is one of the reasons why most of us use public transport to get around.

San Francisco has to be one of the most bicycle-friendly cities in the country. There are hundreds of miles of cycle paths and off-road areas to get you where you need to go. You will still have to contend with traffic on many routes, but it isn’t anywhere near as challenging as cycling somewhere like LA or San Diego.

Like bicycles, San Francisco is incredibly pedestrian-friendly. As long as you have the stamina, you can walk almost anywhere in the city. Most of the major tourist areas are walkable and within easy reach of each other, bus stops or trolley stops. Getting around here on foot is actually a pleasure.

San Francisco gets very busy as you would expect of a city of several million. However, with a little preparation and care, it’s easy to navigate yourself around, even if you don’t live here. The accessibility of everything only adds to the city’s allure and makes it even more of a great place to stay!