Boulder, Colorado is a haven for the healthy, the active and the creative. With some of the best quality of life in the country, some of the best artists and education in the world, it is a great place to live and work. Set over a mile above sea level, we’re closer to heaven than almost anywhere else.

The history of Boulder is linked intrinsically to the Old West. Founded in 1858, the settlement was originally and occasionally home to the Southern Arapaho tribe. Gold prospectors set up camp in the area at Red Rocks, near the entrance to Boulder Canyon to allow them to see their fortune. 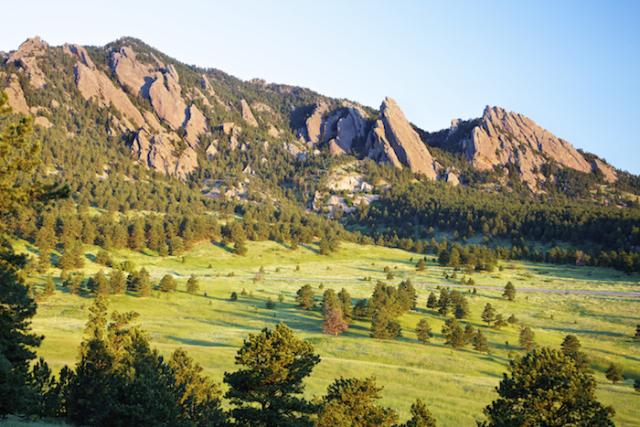 A year later, the Boulder City Town Company was launched to set up a town and lots were sold for $1,000 each. That price had to be lowered to entice new settlers to the area as it was a lot of money in those days. As a result the beginnings were slow. The early residents worked supplying the needs of miners and trading. Agriculture gradually took hold too, then drinking and gambling became part of the life here.

Education came early to Boulder, with the first school being opened in 1860. The University of Colorado came in 1874 after much lobbying by residents. The campus was granted 50 acres of land and $15,000 by the government to set it up. With that move, education became a focus for the town and drew in lots of people from around the state.

Around the same time, in 1873, the railroad came to town. It linked Golden with Denver and went on to the mining camps and brought much needed trade and money with it. In the late 19th century, Boulder moved to tourism for its fortunes, with hotels, resorts and venues. While tourism dipped during the war, the opening of the US Navy Japanese language school ensure our survival and brought new blood to the town.

By that time, tourism and health were major influences over the direction Boulder was taking and remain so in the modern city. That’s why we’re regularly voted as having the best health and the best quality of life in the country.

Our climate is mainly dry and sunny. We get over 300 days of sunshine per year. Winters are cold thanks to our altitude and proximity to the mountains, but it rarely goes below zero degrees. Our winters are mainly rainy, but there is over 88 inches of snow each year in the mountains.

Boulder Municipal Airport is our main aero hub and is only 3 miles outside the city center. It’s small and services local craft. Fly into Denver and drive is the usual advice for those visiting the area.

We have local and national train services in Boulder, with a 41 mile train linking us to Denver but it has yet to open. It’s estimated it will be 2016 before it actually does, but will be great. Other than that, we have plenty of buses to choose from which are run by the RTD (Regional Transportation District). The Hop, Skip, Jump, Bound, Dash and Stampede bus routes connect the entire city and is an extremely popular commute method.

Roads are busy, as cycling is a real favorite here. If you’re driving here for the first time, you need to be aware of the sheet number of cyclists on the roads. Inner city routes get busy during rush hour, but getting around by car is pretty easy.