Denver is perfectly located, well evolved, friendly, welcoming and well worth a visit. In fact, it’s a great place to be!

Denver has an idyllic location in Colorado, at the base of the Rocky Mountains and surrounded by National Parks, forests and a beautiful green land. 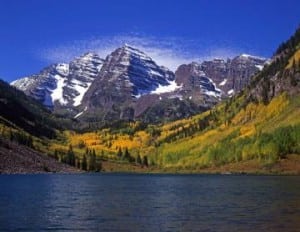 Denver came to be thanks to the gold rush. When prospectors found gold at the base of the Rockies in the 1850s, it brought hundreds more prospectors with their families. This brought many supporting trades and the area suddenly became very busy.

These first visitors settled a small camp on the banks of the South Platte River but it didn’t stay small for long. As more gold was found, more people flocked to find their fortune.

General William H Larimer came to the area in 1858 and claimed the land on the other side of Cherry Creek. He staked out that claim and named it Denver, after James Denver, the Kansas Governor of the time.

A year later and both sides of the river were being settled, with tensions between the two. As Denver was the more organized of the two, an agreement was reached to settle that instead of the other and everyone moved across the river. Tensions eased and the city steadily grew.

The population saw ups and downs as gold was found elsewhere and prospectors came and went but the foundations were laid for a successful and prosperous city.

There is always something going on in Denver. The great weather and plethora of activities, both inside and out, ensures visitors never get bored.

Life without music simply isn’t worth living. Fortunately, music is another thing Denver has plenty of. We have a wide range of live music venues, comedy clubs, festivals and other entertainments. Highlights include the Comedy Works, Colorado Symphony Orchestra and the Red Rocks Amphitheater.

Denver has a long and interesting history and it’s one we’re proud of. We take every opportunity to celebrate it wherever we can. Anyone who likes to learn the origin of things will be well served here. Highlights include the Colorado History Museum, Black American History Museum, National Western Stock Show, Native American Denver and many more.