Things to Do in Albuquerque

Albuquerque is the largest city in New Mexico and is set right in the middle by the Rio Grande. It’s a big city, the 32nd largest in the country and a beautiful one too. We enjoy a diverse mix of people and a strong Native American, Mexican and Western influence. It makes for a great atmosphere and a great place to live.

If you’re considering visiting Albuquerque, here are some great places to visit while you’re here. They are firm favorites with locals and visitors alike.

Old Town is exactly that, part of the original settlement that became Albuquerque. The Native American and Mexican influence is all around and makes for a very colorful trip. The plaza has galleries, restaurants and stores, while the oldest building in the city, the Church of San Felipe de Neri is to one side.

The Indian Pueblo Cultural Center celebrates the culture of the original inhabitants of the area, the Pueblo peoples. The center has exhibits, live shows, guest speakers and cultural events throughout the year and is well worth a visit if you want to learn more about the people.

The Paseo del Bosque is an outdoor space that stretches for 16 miles through Albuquerque. It is the very best way to explore the city on foot, while enjoying the sunshine and peace and quiet away from traffic. It’s a definite highlight for locals too.

ALBUQUERQUE MUSEUM OF ART AND HISTORY 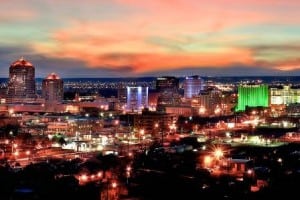 The Albuquerque Museum of Art and History needs a good few hours to even scratch the surface, let alone experience everything. Exhibits cover everything from native tribes, Spanish conquistadors, a 19th century chapel and works of art. There are also traveling exhibits displayed throughout the year.

The Sandia Peak Tramway is the world’s longest aerial tram at 2.7 miles long. It stretches from Tramway Loop in the city right up into the Sandia Mountains and ascends over 10,000 feet. It provides some amazing views that you simply couldn’t do justice with a photograph.

The New Mexico Museum of Natural History and Science offers a glimpse into the ancient past of the American Southwest. It has displays from the dinosaurs to the ice age and even features a volcano you can walk through. This well thought-out museum is a great place to enjoy a little history and educate yourself without being dry and boring.