Portland, the City of Roses, is the largest city in the state of Oregon and the second largest in the Pacific Northwest. It has a relaxed, laid back feel that only adds to the city’s attraction and is one of the main reasons companies and families choose to settle here.

The History of Portland

The first recorded visit to the Portland area was from Lewis and Clark in 1805. They sailed along the Columbus River and briefly surveyed the area. It was allegedly their reports that influenced settlers to find the area and stake a claim. First among those was William Overton and Asa 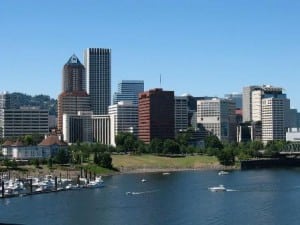 Lovejoy from Boston who settled where the city sits now and began their settlement.

The city of Portland was incorporated in 1851, having been named after another settler’s, F.W. Pettygrove’s, hometown of Portland, Maine. The Columbus River was a major trade route for San Francisco so it saw a lot of trade. The burgeoning settlement of Portland was a logical stopping-off point for the boat traffic, offering much needed trade and commerce.

The arrival of the railroad in the 1880s, the increase in demand for timber and steel ensured Portland’s survival. For a while, it was the largest city in the state until Seattle grew faster and bigger.

The fertile plains, proximity to the river, plentiful lumber and forward-thinking policies ensured the success of the city through the ages. The modern city of Portland still has those qualities and is regarded as one of the most forward-thinking cities in the country. It now plays host to a lot of creative businesses and technology companies, ensuring its future success.

The position of Portland in the Pacific Northwest ensures we get plenty of rainfall in the spring, fall and winters. It gets wet rather than cold, but our summers are hot and sunny. You’ll know when the sun is out as we all get our shorts and sandals on to make the most of each sunny minute!

We have Portland International Airport if you’re traveling by air. It’s 10 miles north of the city and is part air force base and part civilian airport. Despite this, most major carriers run services here, including a lot of non-stop from around the country and further afield.

Getting around by car is relatively easy apart from at rush hour. The steady growth of Portland has outstripped road building by a long way, so there are more cars around than roads and parking spaces. Getting in and out of the city is easy via Interstate 5 and Interstate 84.