Atlanta owes its growth and success to the railroad and served as a rail hub for most of its history. That’s a function the city still performs, with stockyards and junctions for major railroads, as well as a passenger service run by Amtrak. To view our corporate apartments click here. 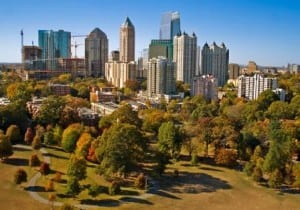 There is currently only one passenger service into and out of Atlanta. That’s a daily service run by Amtrak. There is still plenty of railroad activity but it’s now mainly freight. MARTA, the Metropolitan Atlanta Rapid Transit Authority, runs 47.6 miles of rail routes in and around Atlanta that include 38 stations as overland and subway.

Construction is already underway on a new streetcar system that will include Downtown and hopefully, two other systems once all the details have been finalized.

The use of public transport in Atlanta is one of the highest in the country. MARTA runs 554 buses over 91 bus routes. The coverage is pretty good, although there are still some holes. As cities go, it’s well-served and well utilized.

It’s pretty easy to get around the city by bus and the fares are inexpensive. There is also plenty of parking around major stops and all in all, it’s pretty seamless to use.

Getting around the city by car can be a challenge as with any major metro area. A lot of commuters use them to get in and out and traffic jams are common. Atlanta has the dubious honor of having one of the longest commute times in the entire country, so only use your car if you have to.

There are a number of major routes going in, out and around Atlanta including I285 that acts as a beltway around the city. I-20 runs right through the middle east to west, while the I-75 and I-85 run north-south. 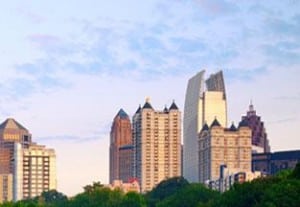 Cycling is becoming popular but still has a long way to go when compared to many other developed cities. There are many commuters who prefer bicycle to car, but the fact Atlanta is made up seemingly entirely of hills and the lack of dedicated cycle lanes makes it difficult unless you know the city well.

There are projects afoot to make cycling around Atlanta easier, such as the Beltline, but it will be a while before it will make any real impact.

If you live downtown or near a transit stop, getting around the city on foot is relatively easy. Many of the districts are on or near bus routes, so walking everywhere else is simple enough. With traffic as it is, walking around is many people’s preferred method of transport.