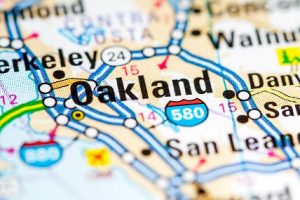 the country. While the port influences the local economy, it is one of many industries in the city.

Oakland is culturally diverse and very colorful. There is a lot to see and do here with lots going on across the region. It is across the bay from San Francisco, joined by the I-80, north of Union City and San Jose and south of Richmond. It’s a very lively city with a strong cultural scene and lots of historic neighborhoods.

The Port of Oakland handles 99% of all containerized goods moving through Northern California and is quite an influence over the local economy. It employs almost 200,000 people directly or in support roles around the port and the city.

The city isn’t just a one-trick pony though, there is a lot more going on here than just shipping. 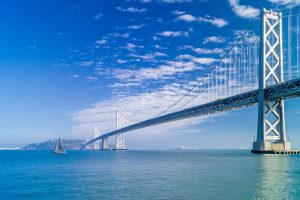 Amtrak runs services into Jack London Square Station including the California Zephyr, Capitol Corridor, Coast Starlight and San Joaquins. Oakland has the BART subway that runs throughout the city too.

Buses from BoltBus, Greyhound, Hoang Express and Megabus all stop in Oakland while AC Transit, The B and Emery-Go-Round run local commuter services.

The San Francisco Bay Ferry runs regular services from Pier 41 and Ferry Building in San Francisco over to Oakland by Jack London Square.Roads are plentiful with I-80 over Bay Bridge, I-580, I-880, and I-980, US-101, Route 242, Route 24 and Highway 123 will see you anywhere in the city or wider California. 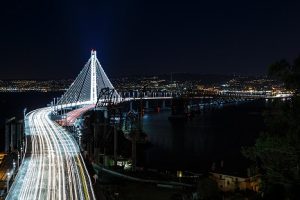 Oakland is a hugely diverse city both in terms of population, culture, history and geography. There is no one characteristic that sums this city up which means there is a huge variety of things to see and do.