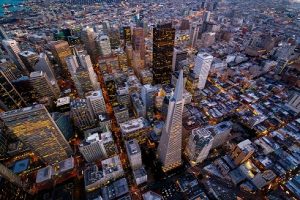 First founded by Spanish colonists in 1776, San Francisco includes the Bay Area and Oakland. The Spanish started by building a fort and a religious mission. The gold rush in the 1840s brought prosperity to the city, which grew at quite a rate.

Today, it is now a vibrant, exciting city with just over 7 million people. That means there is plenty of corporate rentals in San Francisco to explore!

The city is an eclectic mix of Spanish and traditional American architecture spread over rolling hills, flat lands, and the bay. The Golden Gate Bridge and its surrounding fog are two of the most iconic images of the area.

The city is a haven for culture and art, and it’s known as one of the most open-minded cities in the country. This offers great opportunities for anyone wanting to explore their creative side. When you’re looking for corporate, furnished housing in San Francisco, keep an eye out for artistic flares in both architecture and home décor.

The main economic power behind San Francisco is tourism. Add to that a beautiful location, famous landmarks, and endless things to do, it’s easy to see 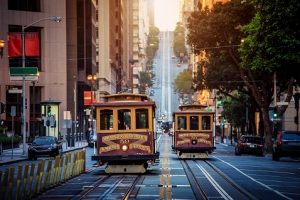 why visitors flock here by the million. Alcatraz alone attracts 1.5 million visitors, and Pier 39 at Fisherman’s Wharf is ranked the third-most popular tourist attraction in America.

San Francisco also owes a lot of its success to tech-powerhouse neighbor, Silicon Valley. The city is also a hub for the service sector, especially in financial services. Wells Fargo is headquartered in the Golden City, and Craigslist, SalesForce, and many other tech companies list San Francisco as their home.

It’s also host to major advancements in biotechnology and biomedicines, including stem cell research programs at the University of California San Francisco (UCSF). In fact, UCSF has one of the largest health and biomedical science departments in the country. The university-run San Francisco Medical Center is one of the top ten hospitals in the U.S.

If you’re visiting San Francisco for longer than 30 days, it makes sense to rent a corporate apartment from Blu Corporate Housing! Choose from the best corporate rentals in San Francisco and make the most of your stay in this amazing city.